We made traditional cordon bleu with a mustard béarnaise sauce. Lately we tie the breasts because of our lazy knife skills. And it was amazing as usual – Stuffing with ham and double coating the tied breasts and browning all sides in an inch of sunflower oil.

After dinner we joked abut make one big similarly breaded chicken breast roll up with ham and cheese in the center. Somehow this oddity made it onto a weekly menu and the other night we made it.

But hark! Making bread crumbs is not a big deal.

It was obvious right away that this weird dish had the potential to be amazing. As odd as the idea of arranging 5 butterflied breasts and rolling the, into a 24 inch long deep fried log was, we began to realize that it was guaranteed to be delicious. So we really applied ourselves to bring it to fruition. We welcome you to comment on your own attempts to recreate the Chicken Cordon Yule. And maybe we can publish some pictures if you are not too shy.

A note about the name. We have kids and grandkids living with us. All of us are fortunate that this is possible. It causes us renewed wonder at the richness of mundane things because we are there with our 7 and 4 year old discovering life, specifically in this case, the holidays. When we began assembling the parts conversation reflected our excitement at documenting the process. Just a little earlier that day my daughter was explaining yule logs and we were texting about making one. We tried several names while cooking; decided on none of them. When she sent me the pictures (there were 84!) the folder they were in was named Chicken Cordon Yule.

I think you can see why from the pictures.

Feeds 7 for more than one meal

5 organically grown (probably Cornish cross monster chickens by the size of these breasts. We got ours at Costco – they sell them in large enough packs to increase the size of this experiment.)

4 cups of breadcrumbs (Did I ever tell you that I live in rural America? Walmart is the only real – and I use the term loosely – grocery store within 50 miles. They sell an amazing array of organically grown goodies. But realizing that we did not have enough and searching the aisles, there was no organic premade breadcrumbs. Most urban folk – we lived in Nashville, TN and Portland, OR proper. I know what availability should be. Believe me, it ain’t that here. But hark! Making bread crumbs is not a big deal. Even if you don’t collect bread ends like we do, you can get a loaf of suitable organically grown bread from Walmart and lightly toast them in a 300 degree oven for a few minutes and toss them into a food processor or a blender.

A couple eggs, whipped (You can use whites. This is just a medium to stick the coating to the roll before you fry it. Once browned, the coating will form a shell that keeps the moisture in. Add a tablespoon of water to the eggs.

A cup of organic white unbleached flour. (Walmart did have this – running out of ingredients should be embraced. No matter how much energy you put towards pre assembling you ingredients you will always forget something. No sense in letting it ruin the fun.)

An equal amount of ham sliced the same.

Two or three cups of sunflower oil[1] (It is not organic but it is not yet available as a GMO. We avoid other oils, like peanut or soy, which may add a specific, what some might consider a better taste to the frying for allergies. I believe canola is toxic. But that is a rant for another day.)

A ball of cotton kitchen twine

Dry and butterfly 5 chicken breasts removing the tenderloins for another meal.

Arrange so they overlap. NOTE: it is helpful to have your kitchen twine cut to adequate length and laid out as in the picture.

Arrange ham and cheese so that when it is rolled up the chicken will cover it.

Roll the chicken and ham into a log, being sure to tie each string tightly. You may need more strings. We did. Count the total number of toes BEFORE breading. Trust me, you will want to know.

After the roll is tied, pour the egg and water mixture over and use your hands to coat the entire roll.

Cover the egged roll in flour. And re-coat the floured roll in egg. Cover the roll with breadcrumbs. 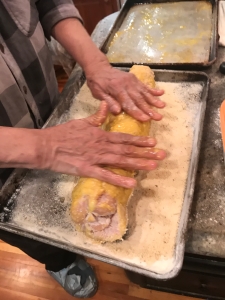 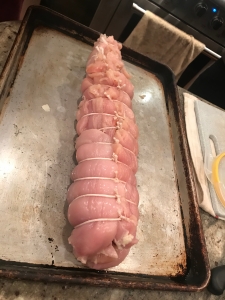 Heat the oil in a large fry pan – NOTE: we realized that a roasting pan would have been a better choice. Our roll did not fit in the pan and we lost a bit of the breading from one end.

Transfer to a rack.

Bake in the pre-heated oven until the inside temps to 140 degrees – 45 min. Make the sauce. Remove and let rest on a cutting board. Chicken should be moist but done all the way through.

The sauce is a standard béarnaise sauce with Dijon mustard added.

Melt the butter in a heavy bottom saucepan on low. Wisk in the four and stir until cooked through 3 min. stirring constantly. Add the milk a little at a time still stirring. After all the milk is added stir on low until the sauce begins to thicken. Add the mustard and stir to combine. Transfer to a gravy boat and leave on the warming shelf until served.

NOTE: In order to be sure the log stayed intact, we used two skewer sticks inserted at the top and bottom to add some rigidity. After the log has rested for a few minutes, cut at the center and remove the skewers (we had to use a pliers.) Using kitchen shears carefully snip and remove each of the ties. (We used suture scissors.) This is where knowing how many ties you used is a big help.

Slice into rondels and serve over orzo or pastina with a generous helping of sauce.

Sorry the color of the sauce is unappetizing. We made ours with sorghum flour so Karen, who has a wheat allergy, could enjoy this. It colors sauces poorly.

[1] A note about GMOs – the jury may be out about whether genetically modified organisms are good or bad. I choose to avoid them for my own reasons. But using any food that has been bathed in poisons like glyphosate, wheat and corn especially is dangerous. It is your business what you eat. But I anti-promote poisons like glyphosate whenever possible. I am affected by them in the foods I eat. Leave your name in the comments to discuss what I have learned to do to avoid the pain and debilitation they caused me.

He never even got to lick the bowl. 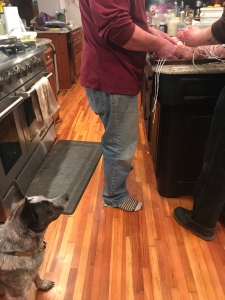 MAKING A DIFFERENCE, ONE STEP AT A TIME

Let Them Eat The Rich

The Journal of Theodora Smith

Engaged Learning, Research, and Practice for a Changing World